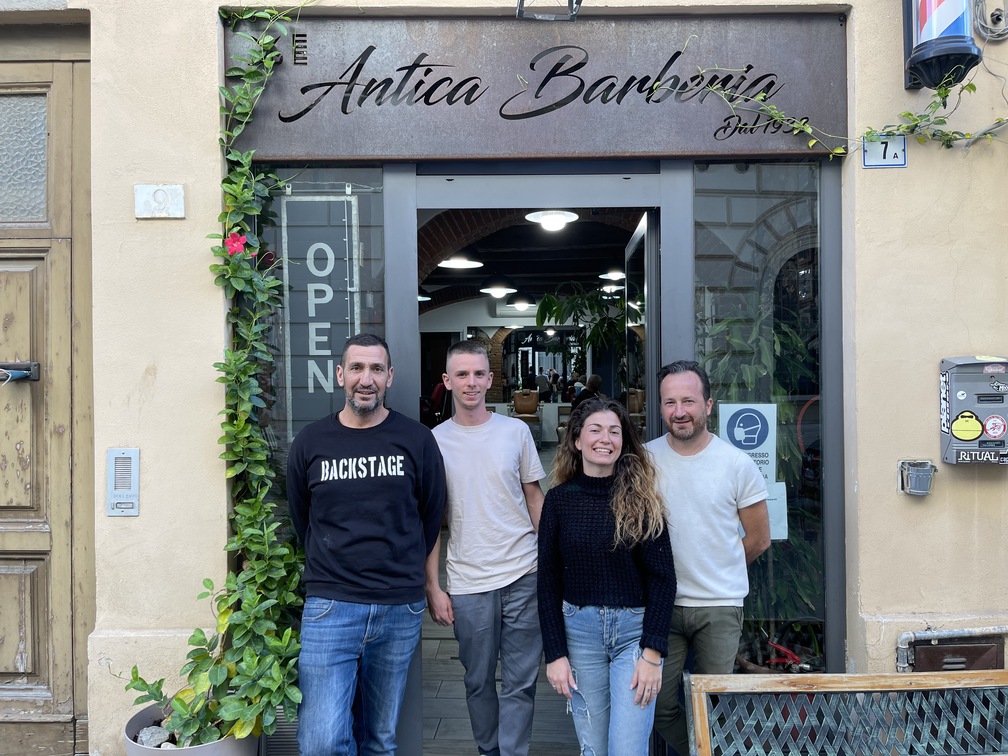 Walking through the beautiful historic centre of Grosseto, in a street parallel to the main street, one cannot fail to notice the old white, red and blue sign on display (which always reminds me of candy). I’m going to have a shave, I think, and also a bit of a chat… 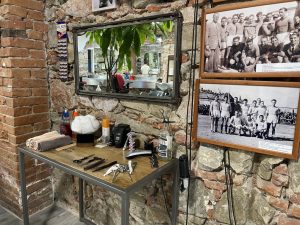 Yes, because here’s Cristiano, Riccardo, Marco and Martina ready to welcome me who, in addition to being true professionals, are also very pleasant people to talk to.

As soon as you enter the shop you imbibe the atmosphere of a barber’s of the past, from the furniture to the equipment. The photos on the wall also tell a story  ̶  which now I’m rather curious to discover.

The family business has been handed down from generation to generation since 1933! In May 1989 Cristiano Bernazzi began going to the old shop where his father worked. As it happened, the apprenticeship was very tough but he soon realized that this could really be the job for him  ̶  and therefore decided to refine his skills with specialized courses (which continued for years) and periods of working abroad. 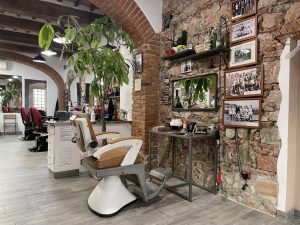 Riccardo too (who is the same age as Cristiano) started at the bottom: “We did whatever needed to be done” in the shop first of his grandfather and then of his mother, where the public was predominantly female. Over time, the founding members (who in their turn had taken over the old 1933 license) of the shop where Cristiano worked began to leave their jobs (some for health reasons, some because of advancing age). Thus Riccardo joined the ‘team’ who, together with Quintilio (the last remaining from the old proprietors) constituted the trio that would ferry the business along almost to the present day.

The great Quintilio began his personal apprenticeship at nine, at a time when licenses were limited and a great deal of ‘intuition’ was needed to get your hands on one. In fact, much of the merit of the good functioning of the current Antica Barberia derives from his vision.

In the 1990s and 2000s the shop was booming and the decision was made to buy a new space to personalize and make their own. Thus, Antica Barberia was born: it was August 1st 2016. 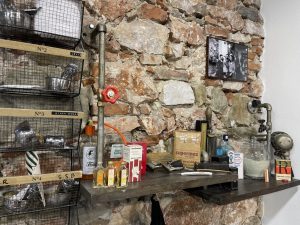 Modern, avant-garde systems within an environment of a vintage flavour… a winning combination!

Quintilio began to think about retiring (like a great footballer) when a boy who seemed to be retracing the footsteps of the young Cristiano, in distant 1989, happened to be in the shop. Marco arrived in the shop aged 14 and Italian law was clear enough: “At that age you just couldn’t work!”. So he went to school and in the afternoons he came in to sweep up… for that you didn’t need to wait until the age of majority!

School, experience and, when he was 18, Marco was finally ready to jump into the fray… It wouldn’t be a real team if there wasn’t a story of true love in all this; to complete the staff in fact there is Martina  ̶  Cristiano’s wife and mother of their splendid daughter. 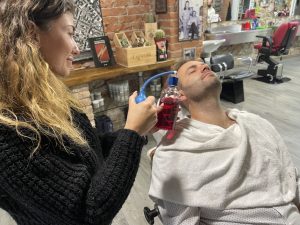 More than a team, a family, a magical place where you can breathe an air of happiness and of professionalism at the same time.

In addition to the classic services such as cutting and colouring, here special attention is paid to detail. For example it is one of the few hairdressers where washing takes place both before the cut and after (to remove residues)  ̶  and that is something to underline as the service seems obvious but instead is often not offered.

In addition, at Antica Barberia you can have a shave just like in the old days. In this case you will find Martina at work, the favourite pupil of the great Quintilio. The pièce de résistance is a splendid 1950s barber chair, then the lather, the razor and the delicious warm cloth to finish the job: a real performance! 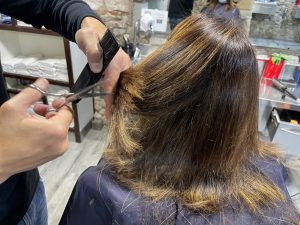 The peculiarity of this service is that regular customers are given a personal towel, their own razor and brush  ̶  kept separately in personal labelled containers.

The beard and hair products that you will find here (such as Kerastase and Wella) are all high-end and you will certainly not find them in the supermarket or other everyday outlets. The service is complete and unisex as the lads are skilled at both male and female cuts. The shop has the classic barbershop hours; therefore it is closed on Sunday and Monday. Obviously you need to book. 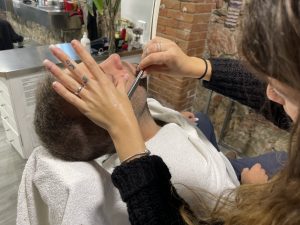 Now that I’m done telling you all this I’m going to have a shave. You should too!