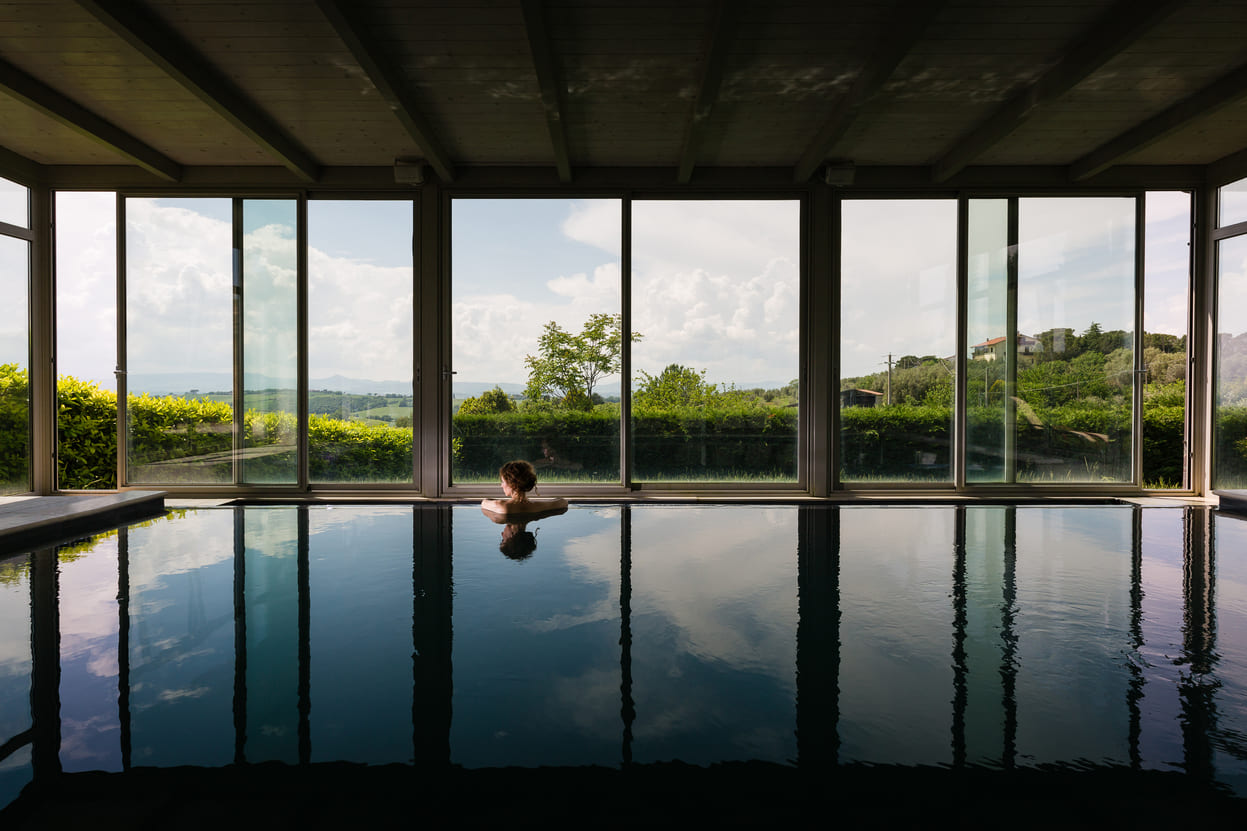 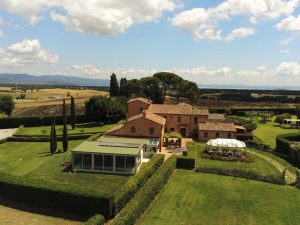 Bruno and Marisella Batinti, after several productive years of hospitality experience with their business “Le Torri di Porsenna” (named for Chiusi’s ancient and powerful Etruscan king) found a new and inspiring site for their country house in Petrignano del Lago, in the Comune of Castiglione del Lago.  Overlooking the rolling hills and vineyards near to Lake Trasimeno, the new location for their country house and working vineyard is well named, as it is certainly fit for a king.

This comfortable and picturesque structure, which includes the country house, treehouse, spa and restaurant, has evolved from what remained of the ancient 15th century Olivetan abbey, founded by seven Benedictine brothers coming from the Monastery of San Secondo on Polvese Island in 1495.  Later, in the 18th century the property became a private farm, but the buildings still retain the sober, elegant architecture of the original Abbey of the Madonna del Pino, built in the red brick that is so well loved and characteristic in the territories near Siena. 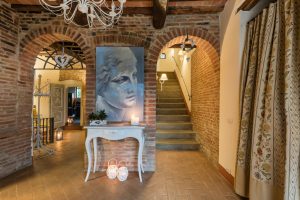 When Bruno and Marisella discovered the property in 2014, the old farm and ancient buildings had fallen into ruin and the structure needed to be completely restored. Their plans included creating 13 beautiful, comfortable rooms from what were once monk’s cells, building a charming tree house, transforming the former refectory into the “Sala Grande” for the restaurant and the Bistrot on the ground floor, but also building a spa, in keeping with their dedication to the idea of wellness as an integral part of the hospitality experience.

Besides the large, outdoor pool, the Torri di Porsenna spa features a heated indoor pool, a Finnish sauna and a Turkish bath, sensory chromotherapy showers, and a “Tisaneria” or a room for relaxing in lounges suspended from the ceiling where one can gently float while sipping a hot tisane. There are also a variety of treatments and massages available. All this while enjoying the spectacular view of the surrounding countryside. 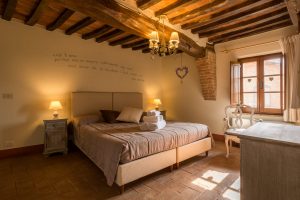 The restaurant is part of the realm of Marisella, who initially acted as the chef for Le Torri di Porsenna herself.  She still oversees the workings of the restaurant and its kitchen today where the talented Mary is now the cook, and insists on the quality of the dishes and their ingredients.  To this end, the restaurant has its own vegetable garden where much of the produce comes from, including the famous Tuscan aglione garlic which goes into their homemade pici pasta.  The various pastas and desserts are all made in the restaurant and special local products such as the saffron of Lake Trasimeno and Cinta Senese pork are also featured.  The Torri di Porsenna lands also include 450 centuries-old olive trees which provide olive oil for the restaurant.

After purchasing the property, restoring the two hectares of vineyards which had been neglected for several years was another important objective for Bruno and Marisella.  With the help of their staff and a professional enologist, in 2017 they had their first grape harvest and this year they are enjoying the wine from 2018 – eighty percent Sangiovese and twenty percent Merlot – which has proven to be an excellent, full-bodied blend.  They produce five thousand bottles a year, much of which is consumed in the restaurant and purchased by guests, but is also available in a number of wine shops in the area. 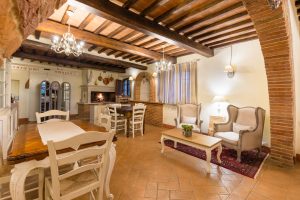 Le Torri di Porsenna today is an enchanting country house and a working producer of wine and olive oil.  This historic property is equipped to host special events such as small concerts, parties and weddings in their gardens and lovely dining rooms. Here one can experience all the best that the territory has to offer – a sense of peace and comfort, quality service, wonderful food and wine, and soothing treatments in the spa, all within the ancient and inspiring Umbrian countryside. 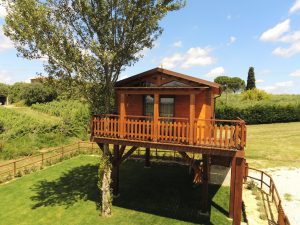