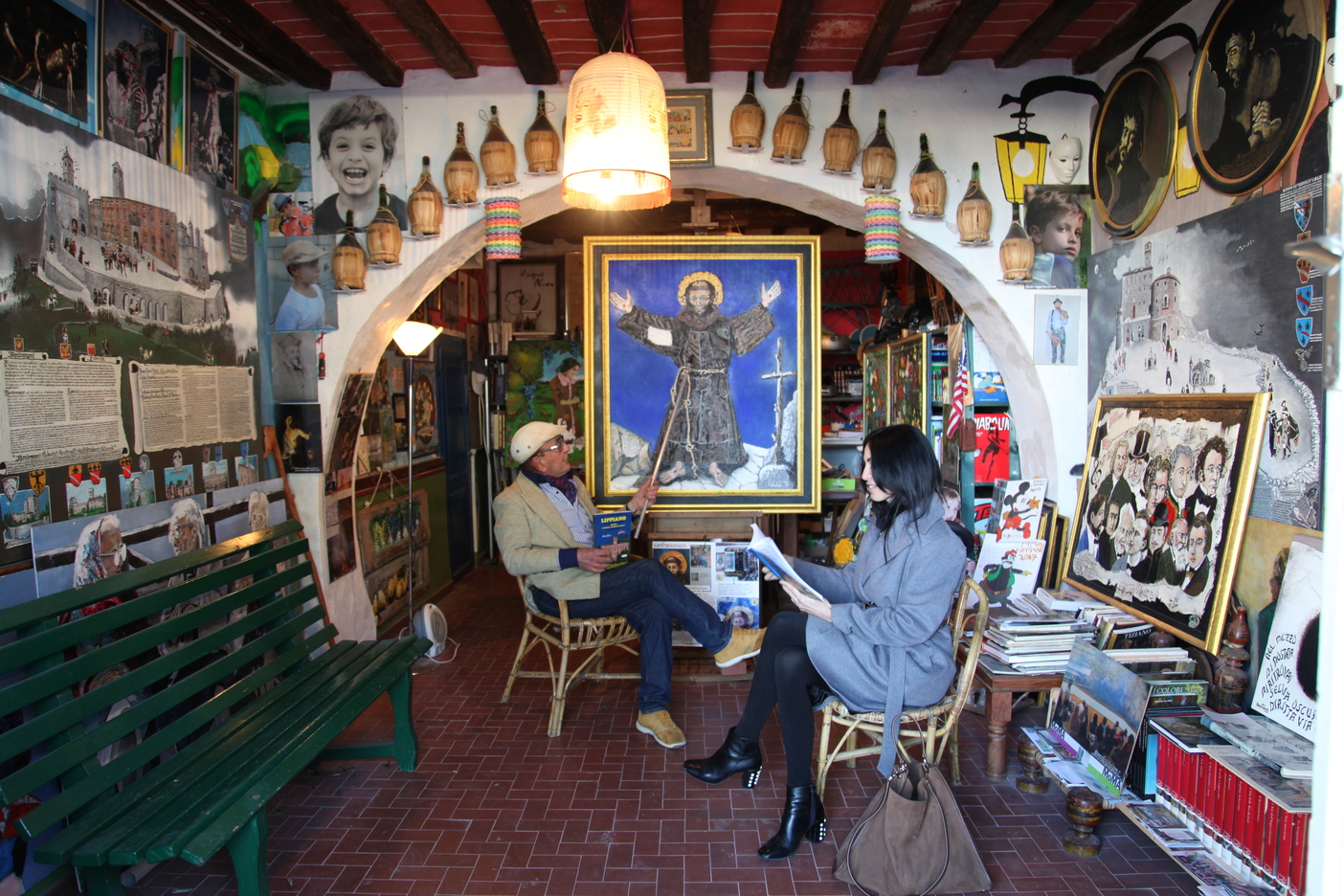 Today is the day for Umberto Pippolini – respected professional and inexhaustible creative type – who has conducted long and passionate historical, documentary and artistic research on Francesco di Bernardone, better known as Saint Francis of Assisi, patron saint of Italy. The doors of his studio in Lippiano (part of the municipality of Monte Santa Maria Tiberina on the border between Umbria and Tuscany) were thrown open and the Saint is revealed with open arms and totally natural charisma, free of any sweetened frigidity. The cold of the morning is pungent and as severe as Francesco’s sharply etched features.

Saint Francis, alter Christus. Hearing about Umberto Pippolini’s research was really exciting, if only for the depth of his voice that ignites and becomes prophetic in tone. But why is the (re) discovery of Francis’ true face in his painting so important in a symbolic sense? Certainly the nature of the question, eminently metaphysical, which interprets the human need for transcendence –  is in this image an epiphany and a revelation of Christ himself, the mystery of life in his divinity. A view that satisfies an immediate desire: the existential need to embrace the Sacred, to have a direct perception of it, albeit mediated by art: “This image of Saint Francis is faithful to the Saint, for a more intrinsic reason than a simple hypothetical sum of somatic motifs; it is because it is both an image that you see and a reflection. Francis is reflected in the face of Christ, and from this derives his own face. This is why he does not put himself at the centre and stands aside, as far as he looks beyond himself, this is why he is always in motion.” (Philippe Daverio).

On the other hand, in this modern world that has already consummated its ‘funeral for the Sacred’, dominated by technological homologation, relativism and moral confusion, nature can give us an orientation, a direction and a centre. In this image, a marked artistic naturalism throws an anchor to those who still question themselves and seek to make sense of the bewilderment and existential void that besieges them. This return to nature in its founding and clarifying essence, after the metaphysical rigour of Pope Benedict XVI, is fully validated in the pontificate of Pope Francis who in his activity vigorously encourages a sort of ‘reduction and simplification’, promoting an ever more social naturalism, and a certain new operational pragmatism.

Cimabue’s fresco Madonna in Maestà which bears the image of the Saint (1278), preserved in Assisi in the right transept of the Lower Basilica of San Francesco, is one of the very first representations that reproduces the features, suggested by his first biographer Fra Tommaso da Celano. “You really get the feeling that he should have just that look and that face”, Daverio tells us, thinking of a ‘synthetic intuitiveness of genes.’ Whether it’s Caravaggio’s Matthew, Masaccio’s The Tribute Money or Giotto’s Magdalene – “who can doubt that (Francesco) was really like that? We see him small, all in one piece, with a sharp look; he stands a bit on the sidelines, on the right of the throne (on the threshold, one might say…) and looks at us frontally, with a gaze as deep and as human, as it is free from any trace of the pathetic.”

Umberto Pippolini – who was strongly influenced by Daverio in his reflections and efforts – gives his Francesco a face “with a dry, sharp look, as profound as it is human.” For the artist the Sacred becomes an individual and universal experience, the Truth ‘is made’ while it happens, it is manifest nature. But there is another naturalism, an emotional one, in the spasmodic search for a ‘true truth’, which distinguishes the work of Pippolini, who tells us of “having put St. Francis in his habit, patched with Saint Clare’s cloak”, also exhibited in the Basilica of Assisi.

Umberto’s historiographical and documentary research was enriched, in fact, by reading the Legenda Maior of Saint Bonaventure, the official biography of the saint adopted by the Franciscan Order of Friars Minor. There we learn that St. Francis wanted his followers to wear the garb of the peasants of the time, the peasants of Umbria in fact: a sort of sack, or smock with a neckline and two holes for the sleeves. A hood was added to the cassock for the cold and as protection from the rain. “Regarding the white section, the ‘patch’ of the robe – continues the artist – there is a well-founded theory by a Swiss textile historian, one Mechthild Flury-Lemberg that Saint Clare would have taken pieces of her cloak to repair the Poverello’s tunic. The many brown pieces sewn with care, including the left sleeve – which I photographed piece by piece in the Basilica of Assisi – apparently belonged to Saint Clare’s cloak.”

Furthermore, Saint Bonaventure da Bagnoregio is credited with the Sermo di Sanctissimo Corpore Christi written by order of Pope Urban IV, who, in 1264, was a witness to and very impressed by the sight of the gushing of blood from the ‘consecrated particles’ (the relics, ed.) of St. Francis during a mass. So it was that later, the same Pope instituted the celebration of Corpus Domini, commissioning Bonaventure himself and the Dominican philosopher Thomas Aquinas to formalize the cult.

Saint Bonaventure made clear in the Sermo his intention to make people understand how Saint Francis, with his ‘holy life’, was to be considered as the image of Christ Crucified: just like Jesus, half-naked and with stigmata, the hands and feet pierced and the chest wounded. Umberto says he is “convinced that the most faithful image of the consecrated Saint is that of the original painting by Cimabue – that of 1278 and not the current one which unfortunately has undergone repainting and been tampered with over the centuries. This image is the reflection of the ‘face of Christ’ (Daverio) and the ‘Crucified Christ’ (Saint Bonaventure) and it is exactly what I wanted to represent.”

This is the power of Saint Francis’ epiphany: another man, another face, they are illuminated and leave for inheritance another experience of the sacred.

The studio of the artist Umberto Pippolini is located in Lippiano di Monte Santa Maria Tiberina (Pg). To book a visit or contact the artist: Tel. 348 7996631 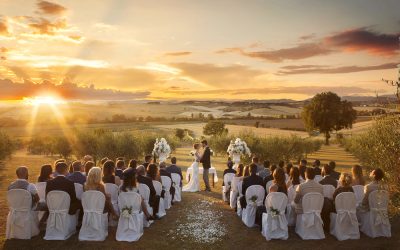 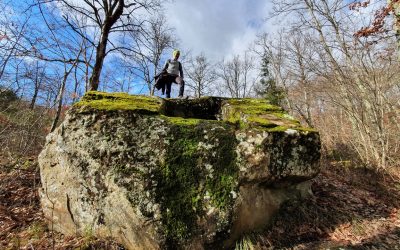 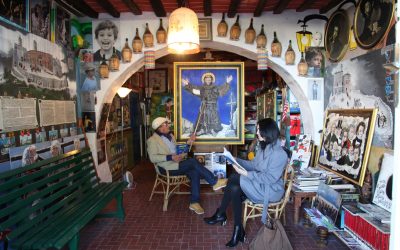