Moira Tassi and the eternal feminine

“The eternal feminine draws us on high”

Moira Lena Tassi, who I met only recently, is a discovery. That reveals itself by degrees and displays a nucleus of unique and perfectly recognizable truth. That what seems to be it is often not what it is. And this is especially true for her subjective realism, a powerful female naturalism that distils a pervasive, charismatic charm. Moira traces forms, figurations in fact – which are nevertheless invested with a higher consciousness – which the artist carries within herself, intuitively: the eternal feminine dances in her canvases.

A certain type of ‘feminine’; a deep, radical feminine that evokes a certain supernal sacredness, driven by an absolute self-consciousness. These are the characteristics of the ‘feminine’ in Moira Lena Tassi, a strong push to the heightening that defines power and beauty in women.

Whether it’s the portrait of a glamorous Monica Bellucci, or an eccentric, elegant self-portrait in shades of red in a magnificent dress ‘Lo sguardo oltre la finestra’ [Looking through the window], the process is always the same. Allowing nature inside, the human soul, to manifest itself through the presence of the body and its position in space. A game of chess that recalls the logics of genre work but that is conducted without any artifice. Pulsing with – and then bursting – the very root of beauty, its own origin, thereby finishing the game.

“Passion and love are the feelings that govern the world and push you to do everything in life,” Moira tells me. So I think of that famous Latin tag Amor vincit omnia – which many even have tattooed on their bodies. With reason, ‘women know it’, as Luciano Ligabue sang.

This ‘immobile motor’ which is Love, the driving and centripetal force of the entire universe, lights the fire and somehow patrols the agreement between the individual and the infinite, guaranteeing beauty and immortality.

Having clarified this, it is funny to hear the profane aspects and practical genesis of her work; an ability to define with forms, to condense essence, which also transpires in other subjects: “I met Monica Bellucci’s parents, Brunella and Pasquale, as they came to my show last February (Non solo ritratti  [Not just portraits], Sala del Quadrilatero at Palazzo Bufalini, Città di Castello, ed.) and they invited me to meet her at the new Municipal Library, a few days after its opening. On this occasion I was able to ‘officially’ give her two works inspired by her – a portrait of her as a fifteen-year-old, which emanates a rather spontaneous and natural beauty, and another taken from a very glossy image to which I added a certain tangible humanity, unfolding and revealing her inner notes.”

“For me the gaze speaks of the soul and its my goal to recount and fix that inner light that goes forth from the eyes and invades the space around them, thus enchanting us.”

Thanks to the mediation of the Hon. Catia Polidori, who personally gave him the work (an oil on canvas 120 x 80 cm), Moira was able to pay tribute to Silvio Berlusconi with a refined portrait of him with his mother, on his birthday, last September 29: “He was very happy with it and sent me a very warm thank-you note, written and signed in his own hand,” she tells us. It seems that the Cavaliere [an Italian title given to the ex-Premier, tr.] wants to bedeck a gallery with more than two hundred portraits of himself, amongst them the one by our local artist.

Also significant is her recent great affinity and friendship with the actress, screenwriter and entrepreneur Alexandra La Capria: “She wanted me to be present at the gala evening in honour of her mother, the famous actress Ilaria Occhini who I gave a portrait to… And then she wanted me to do two of herself!” The works are on show at the prestigious Alexandra Loft in Arezzo.

This Castello artist has in fact many prestigious acquaintances and her artistic path began in childhood: a passion kept almost completely hidden that was a lifesaver and a liberating force for her, especially in her darker moments. It only emerged rather recently during a cultural event at the scenic Villa Pasqui, in the hills that dominate the town, in July 2018, encouraged by her friend Maria Elena.

Other works by her are on show at the town centre’s Latino Drink Conversation an elegant and fashionable venue in Piazza di Sopra in Città di Castello run by her friend Alma. But let’s get to her latest work, in itinere and that we have photographed here, for the Tiferno 1474 historical re-enactment (See page…. ): “I wanted to paint an extract of the history of Citta di Catello,” she explains, with Niccolò Vitelli, Vitellozzo Vitelli, the former tobacco drying barns of the Burri Museum, the three secular and religious towers of the historic centre and, in the upper left, – hear! hear! – the image of ‘Fillide riding Aristotle’, and there the circle closes.”

The immobile motor returns to its natural home, which is woman, the eternal feminine. 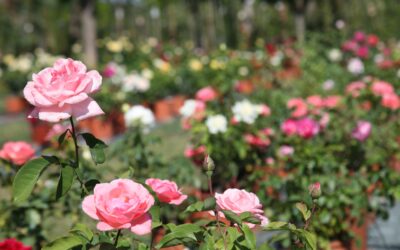 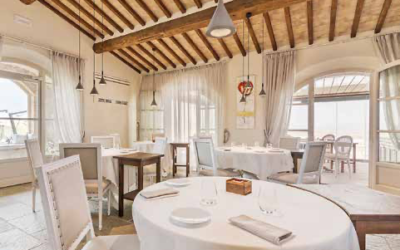 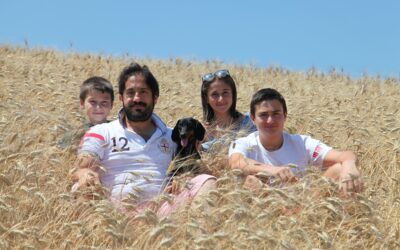